They are found in tiny parcels of land squeezed among Manhattan buildings and in large rolling tracts of land in Brooklyn, Queens and the Bronx. New York City’s cemeteries carry on the ancient tradition of memorializing the dead with monuments, from plain gray markers to imposing crypts. Whatever their size, they tell the story of the city’s evolution – it’s triumphs, tragedies and setbacks – as it became a global capital.

From the 17th century, when the Dutch created a cemetery near present-day Wall Street, New York City has been home to some of the nation’s most intriguing and famous burial grounds, from the pocket-sized Jewish burial ground of Shearith Israel to the hundreds of acres making up the majesty of Green-Wood and Woodlawn cemeteries.

Gardens of Stone takes you on a walk through these memorial parks, guiding you through works of art cast in stone, from small solitary monuments to some of the country’s most grand mausoleums.

For generations, Green-Wood Cemetery has played an integral part in New York City’s cultural history, serving as a gathering place and a cultural repository. Situated in the historic borough of Brooklyn, the thousands of graves and mausoleums within the cemetery’s 478 acres are tangible links and reminders to key events and people who made New York City and America what it is today. The monuments read like a who’s who of American greatness and include the names of Leonard Bernstein, F.A.O. Schwarz, Charles L. Tiffany, Samuel Morse, and DeWitt Clinton, among others. A national historic landmark since 2006, Green-Wood is considered one of the preeminent cemeteries in the country and is a living display of the evolving funeral traditions of the city and America as a whole. The cemetery was and remains one of the city’s largest open green spaces and a century ago was a social venue for picnics, outings, and political events. Through vintage photographs, Green-Wood Cemetery chronicles the cemetery’s rich history and documents how its tradition as a park and a popular tourist attraction continues, drawing 300,000 visitors annually.

From Amazon: “These days, with enrollment in mortuary schools equally divided between men and women,. most forget that female funeral directors were once a rarity. While the public face of funeral service was slow to change, when it did there was nobody more public than Alexandra Kathryn Mosca. Detouring from her chosen path to become a writer, Mosca found funeral service. Or, more accurately, funeral service found her.

Grave Undertakings is a memoir of  Mosca’s singularly unique career. As a beautiful young woman immersed in a male dominated, mostly family-owned  industry, she also kept a foot in the glamorous worlds of acting and modeling. Her ultimate experience as a model –a pictorial in Playboy–set the industry abuzz and seemed to spell doom for her career. Instead, her career continued to flourish, and her writing career was born.

The book traces Mosca’s career path from her earliest days in funeral service: working as a receptionist in a funeral home in Queens, New York, while attending college. It was there that she witnessed her first embalming, an experience she chronicled in great detail. Her experiences in a New York City mortuary school –where the class practiced embalming on the unclaimed bodies in Bellevue Hospital’s morgue –is equally comprehensive. Included are accounts of the dark days of the tragedies of Sept. 11th and Flight 587, balanced by the spectacle that was the funeral of Mob boss John Gotti. Mosca also shares a rare entrée into the private world of Playboy magazine.

Grave Undertakings is as relevant today as it was when it was first published. For those interested in learning about a career as a funeral director, this book is a “must read.”

Funerals of the Famous Volume 7

The lives and deaths of the famous hold a special intrigue for people worldwide.

In this latest addition in the Funerals of the Famous series, you’ll find stories of some of the most memorable personalities in history. With photographs and thoroughly researched profiles, Funerals of the Famous Volume 7 showcases the colorful details of each individual’s death, funeral service and burial.

From “the voice of an angel,” Whitney Houston, whose homegoing was televised for all the world to see, to the 10 days of national mourning for anti-apartheid hero and former South Africa president Nelson Mandela, the celebration of their lives – and their legacies – continues on.

My profiles in this volume include:

Funerals of the Famous Volume 6

The lives and deaths of the famous hold a special intrigue for people worldwide. In this latest addition in the Funerals of the Famous series, you’ll find stories of some of the most memorable personalities in history. With photographs and thoroughly researched profiles, Funerals of the Famous Volume 6 showcases the colorful details of each subject’s death, funeral service and burial. From “Gone With The Wind” star Vivien Leigh’s simple funeral and elaborate memorial service to the Queen of Salsa, Celia Cruz, who would be dressed in no less that four colorful outfits during her visitation period, it’s all here – the moving to the macabre.

My profiles in this volume include: 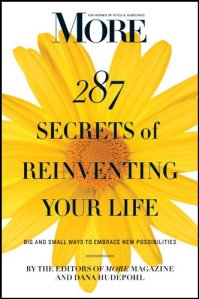 Are you ready to create more excitement and satisfaction in your life? This book can make it happen.

Combining the stories of real women (and a few celebrities) with smart advice from its editors and experts, MORE has create a resource that’s part dream machine, part handbook. Whether you want to switch careers, be your own boss, start doing good in the world, or simply get in better shape, you’ll find the inspiration and practical guidance you need to choose a new path and give yourself a happier, more fulfilling future.

Read this book and take your first step toward positive change. With MORE Magazine’s  287 Secrets of Reinventing Your Life, you can start building your best tomorrow today.

Alexandra Mosca is one of the 50 women who were chosen to share their stories in a book by MORE magazine.

The Bumper Book of Bravery

The Bumper Book of Bravery recounts tales of incredible courage the world over, from the mythical to the modern, and from New York to New Zealand:

Take to the seas and marvel at the first voyage around the world. Dare to go deeper and discover record-setting underwater feats, as well as the French free-diver who refused to learn her limits.

Reach for the skies through balloonists, fantastic flying machines and female fighter pilots.

From ocean depths to giddy heights and everything in between, The Bumper Book of Bravery will awaken the adventurer and hero inside of us all.